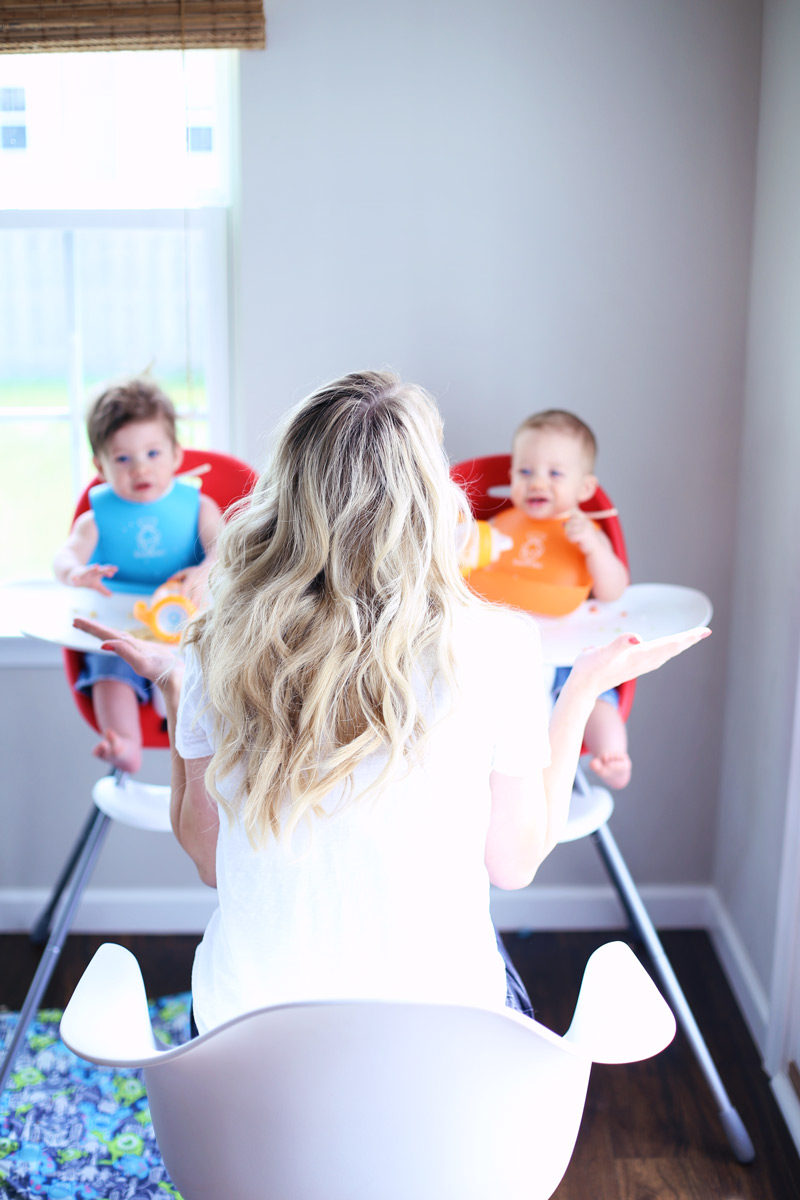 Becoming a new mom is the most exciting and wonderful thing in the world.  I seriously look at these babies sometimes and I just wanna bash my head into the wall they’re so cute.  I wanna squish their cheeks and kiss their faces right off!!!!  Why are my love analogies so violent lately?!  I digress.  While your baby (or babies in my case) is the most amazing thing you’ve ever laid eyes on, being a new mom can oftentimes be a little overwhelming.  Or a lot overwhelming!  I’ve been getting a lot of questions from new moms about our routine, what I’m feeding the boys and how I manage to stay sane.  That last part is debatable… ha ha!  I feel like we’ve got a pretty good thing goin’ on though and so when Munchkin asked me to try out their new LATCH bottles + share a little bit into our day I thought it would be a great opportunity for me to finally get this all written down!  Keep on reading if you wanna see our meal time routine + a few tricks I’ve learned that have kept me alive while navigating the ins and outs of twins!
Shop this post: 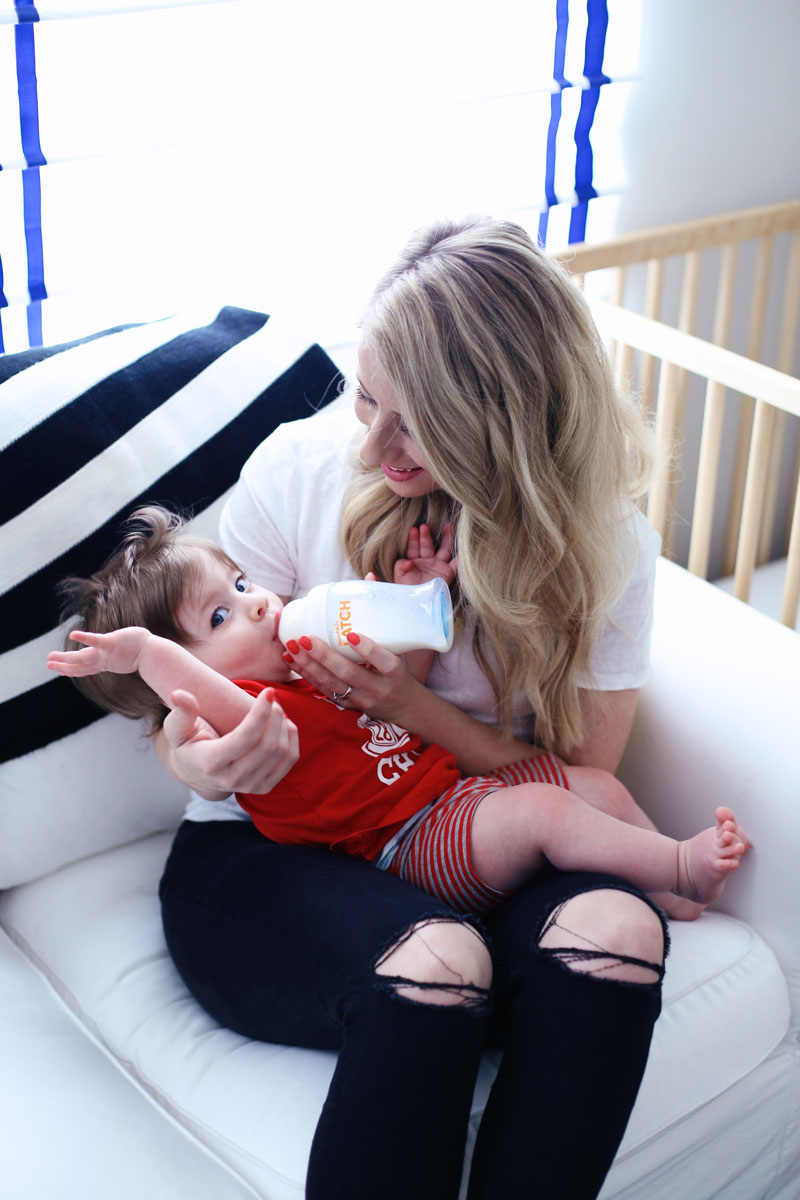 Hey girl, hey!  When the little misters wake up from their morning nap, usually around 11:30, I always feed them a bottle.  There are a few reasons for this but mostly because I’m in the middle of getting the big kids ready for school and I just don’t have the time to sit the boys down and give them a good meal right after they wake up.  So we drink a ba-ba real quick and then I finish getting the big kids ready for school.  I’m not gonna lie, this is the hardest hour of my entire day because I’ve gotta pack all four kids up in the van to take Savy to preschool + get Boston back in time to catch the bus + someone has always misplaced a shoe, doesn’t want to wear clothes or eat their lunch so it’s crazy town.  But when Boston gets on the bus and those boys go into their high chairs, I can finally breathe.  And it’s my favorite time of the day! 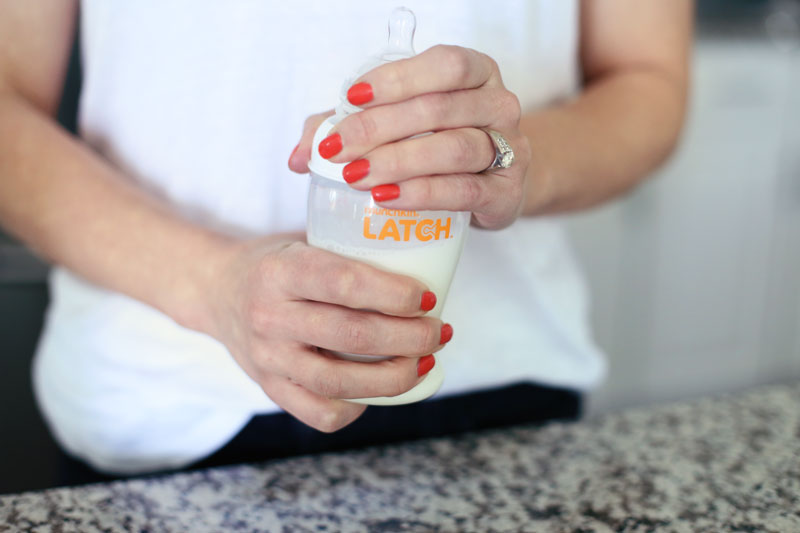 I’m obsessed with these LATCH bottles and I just wanna talk about them for a quick second because I’ve not seen anything like them.  Your baby controls the flow of milk when nursing and that’s why a lot of times babies who nurse have a hard time taking a bottle.  The Munchkin LATCH bottle is designed to mimic the breastfeeding experience and it releases more milk as the baby pushes against the accordion style base.  It’s also got an anti-colic valve on the bottom which ensures air bubbles don’t travel through the milk – and if you have a fussy, gassy, colicky baby you’ll love it!  I love the fact that there aren’t a million pieces to wash + the lids are easy to find because they are larger than most. 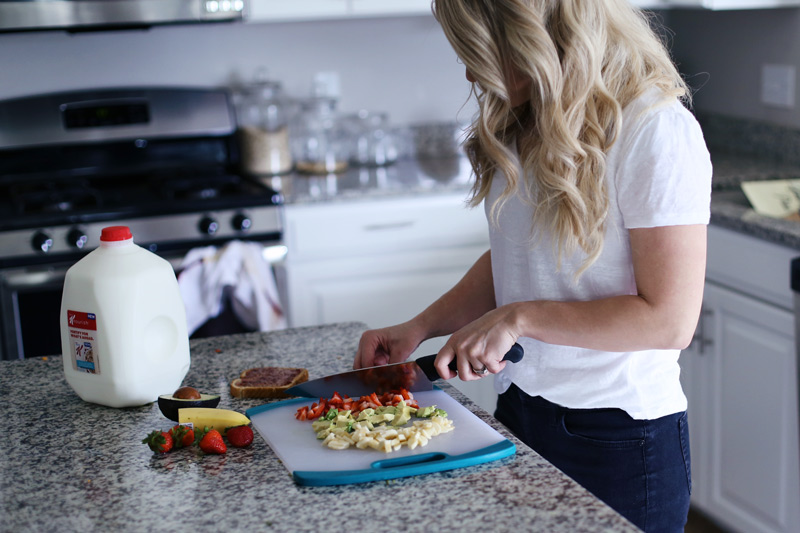 Now onto lunch.  Kai doesn’t care what he eats or how he gets it, he just wants food.  It’s honestly the cutest thing and FOR ONCE I get a child who will eat.  Except I still have to figure out how to feed a child who won’t ha ha!  Coop is so picky and will only eat real people food, he’s totally over anything pureed.  So for lunch I typically chop up some bananas, strawberries and avocados and then I’ll put some peanut butter and jam on a piece of whole wheat bread for them to nibble on.  I also try to keep a few sweet potatoes  and squash in the fridge and will dice them up into little squares when I have them.  We also do a lot of scrambled eggs and cheese squares too!  While they wait for me to get it all out, I put a few cheerios or peas on their trays and if it takes longer than 2 minutes I have 2 babies hollering at me! 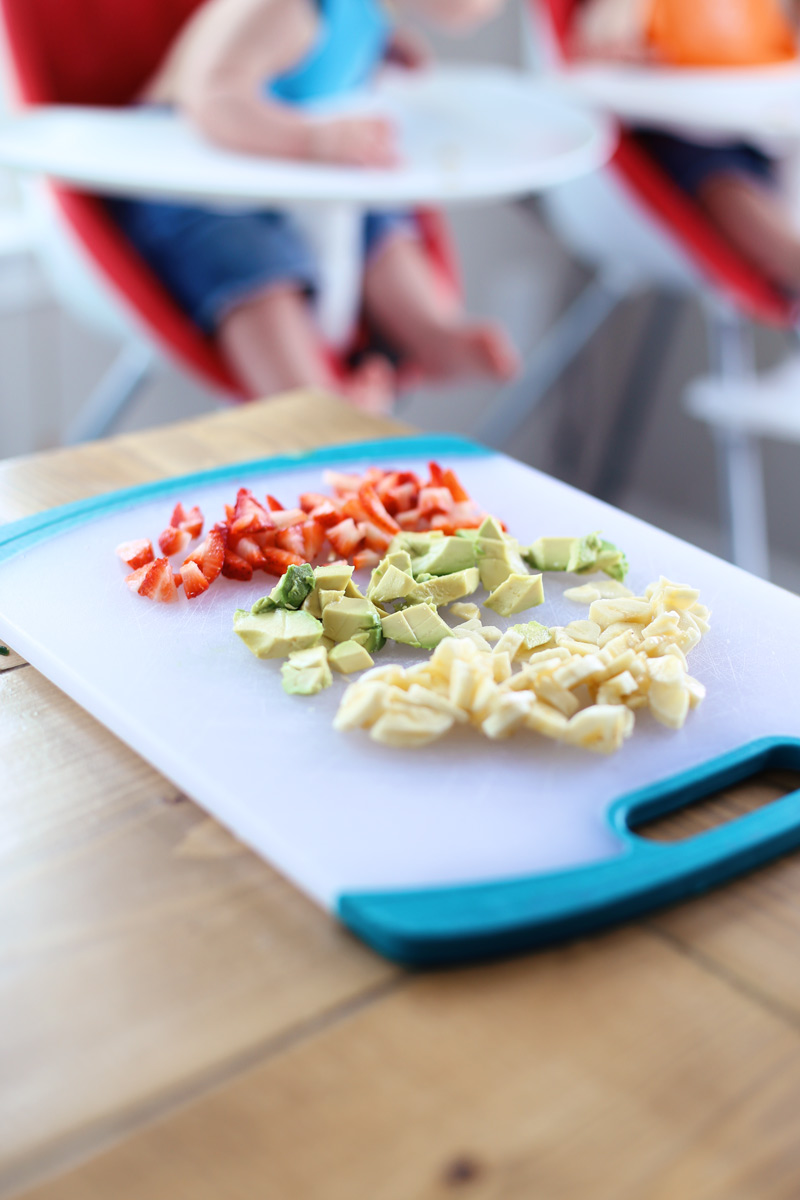 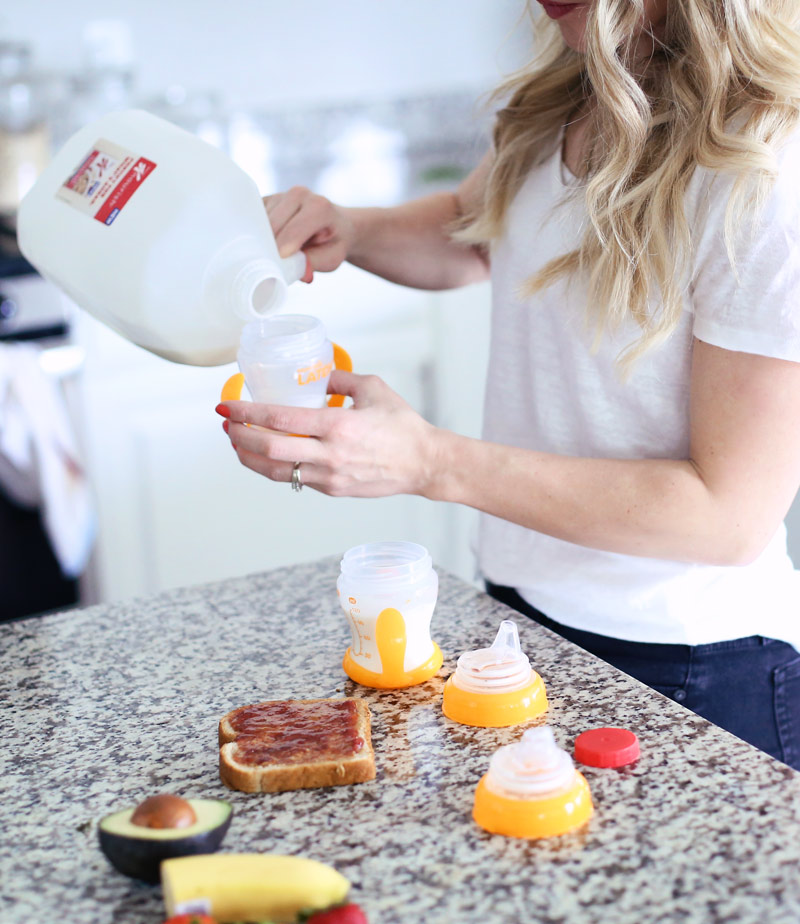 ^^  These are my FAVORITE sippy cups EVER.  They’re the Flexi-Transition Trainers from Munchkin.  After 4 kids we’re literally tried every sippy cup known to man – they’re the bane to my existence.  I think it really depends on the kids so sometimes you just have to experiment but my boys love these.  My boys have a hard time tipping and drinking from the taller sippys and they don’t like the harder plastic ones either.  They just chew on those and they quickly get thrown on the floor.  They love the handles + the soft spout and I like that they don’t leak + they match our bottles!  Because let’s be honest, I’m a little OCD like that!  We got the green light from our pediatrician to transition from formula (I stopped nursing at 6 months) to whole milk so for breakfast, lunch and dinner I give them whole milk in their sippys! 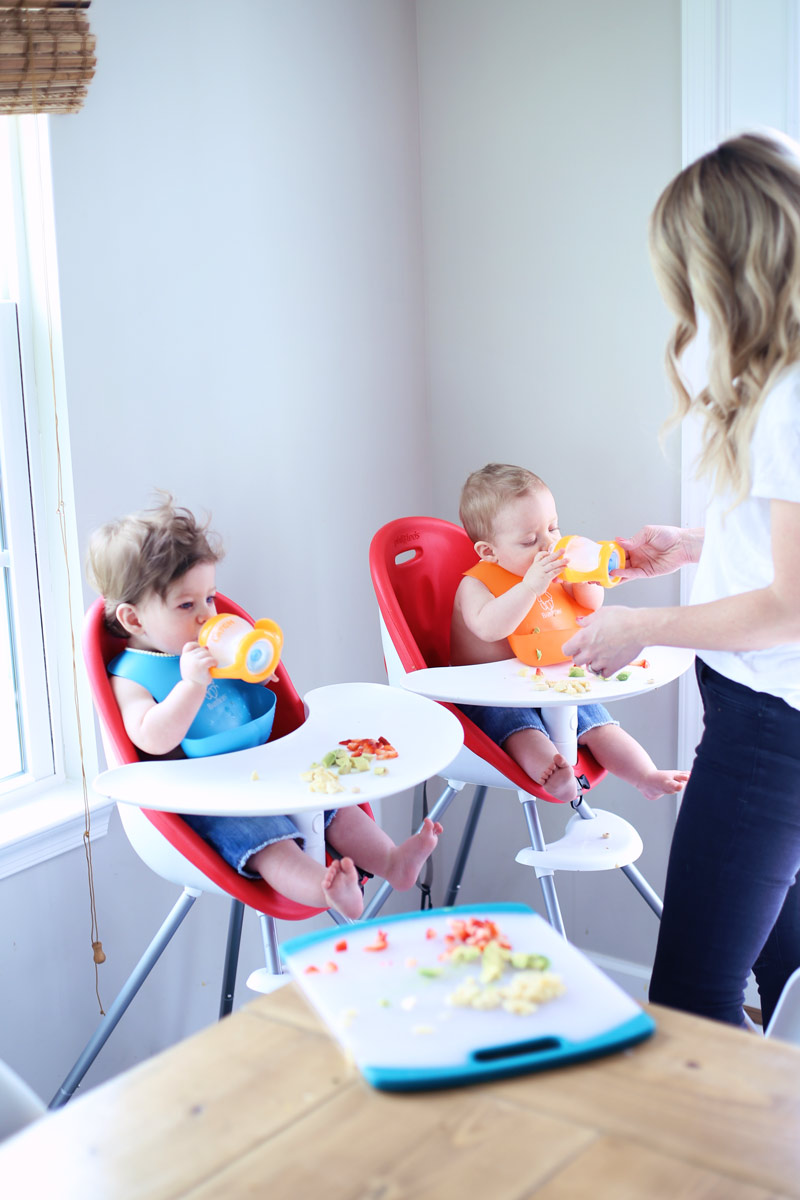 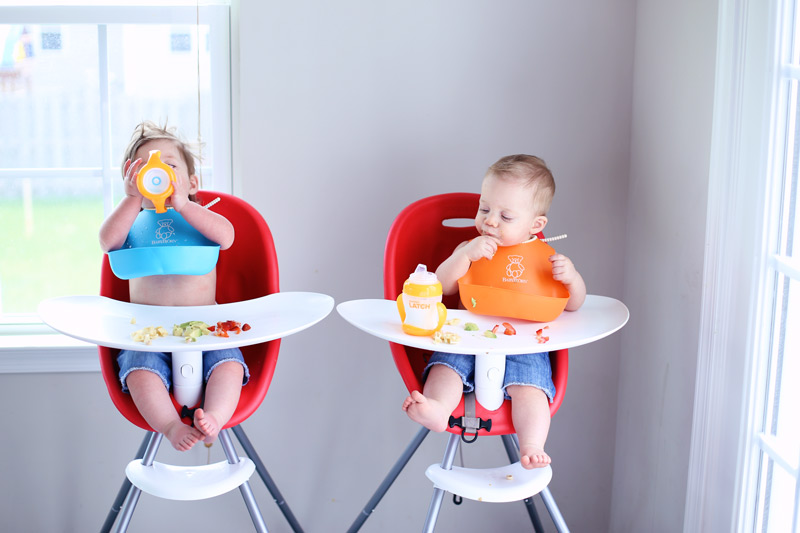 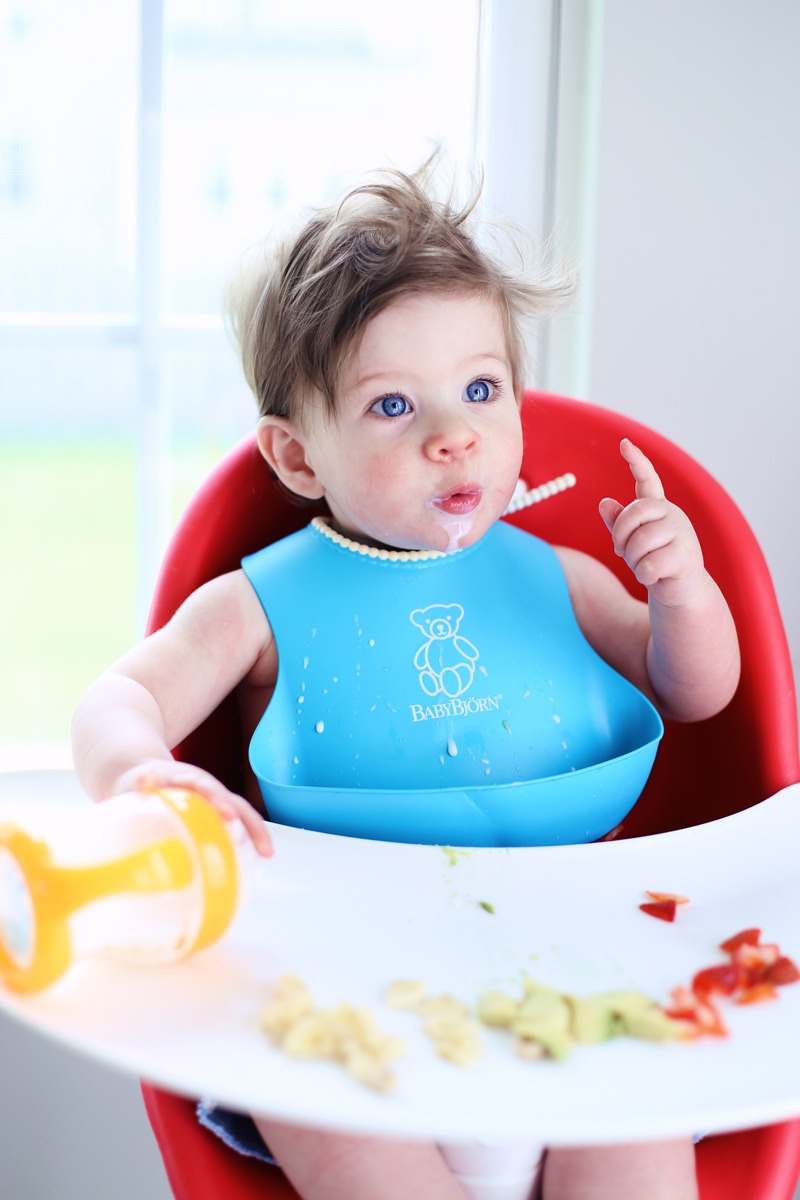 ^^  He has the best bed head!  After lunch I clean them up with a microfiber cloth, they’re like the kind you use to wash your cars!  I like them because they’re soft, they can clean up both boys and I can grab all the extra food off the trays, seats and floors and then I rinse it out once and wipe up the rest.  AND IT’S A MESS!  If you follow me on snapchat (twistmepretty2) you know how messy that corner of our house is!  After the boys are cleaned up I put their shirts back on them, we play for a little bit in the family room, have a diaper change and then around 1:00 they’re ready for their afternoon nap. 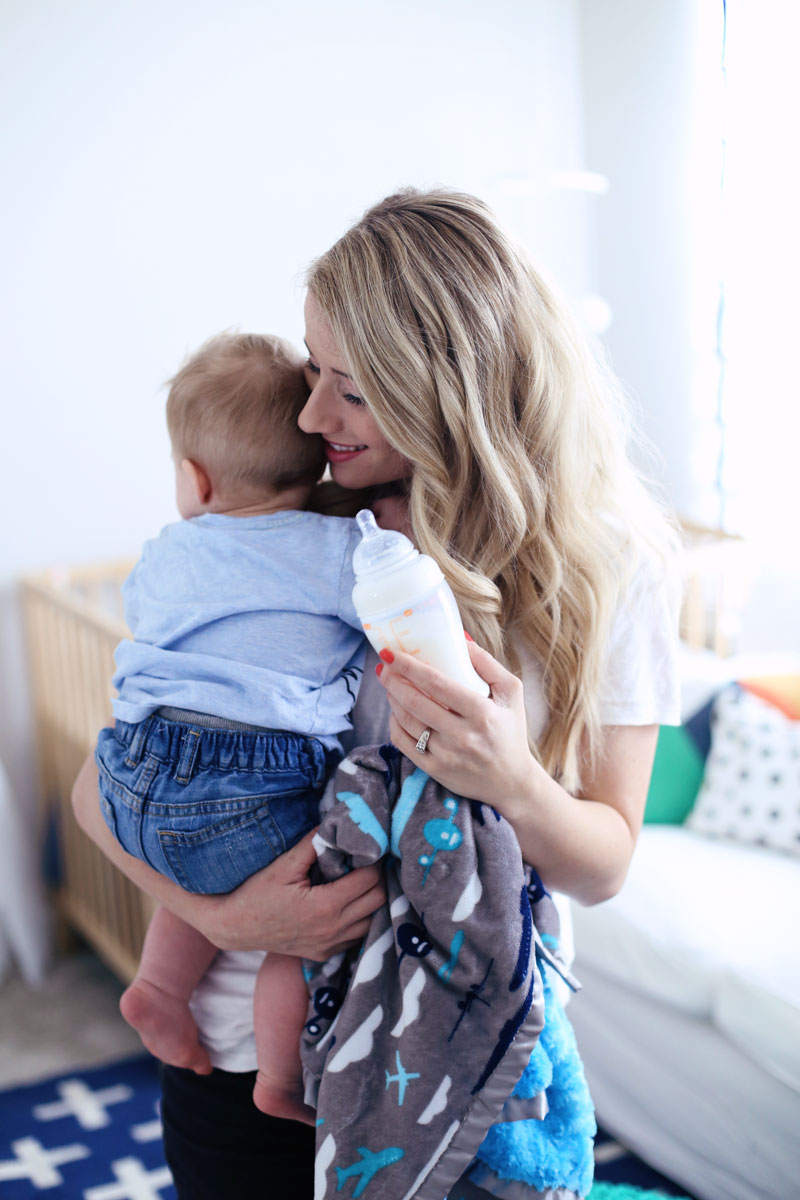 I put Kai down first because he pounds his bottle in 2 seconds + he’s the craziest and I don’t trust him by himself.  Coop is starting to scoot around but he can’t climb stairs yet and is always content playing with one of the toys near our tent for a few minutes.  They nap in separate rooms because in the beginning they kept waking each other up and it just wasn’t worth the fight.  So we set up a pack and play in the guest bedroom and that’s where Coop naps.  Having a routine + finding those perfect products that make your life easier = sanity.  Using the LATCH bottles and transition cups has made things so much easier for me.  There are very few parts to wash and keep clean + they all coordinate and I can throw everything in the dishwasher.  And that means I have a few extra moments to eat my lunch, to tidy up the house before the kids come home or get ahead on some projects.  Are there some tricks or products you love that make your meal time easier with your baby?  Let me know in the comments below and if I missed anything you were hoping I’d cover make sure to ask below and I’ll make sure to answer!!

Having your cake and eating it too…