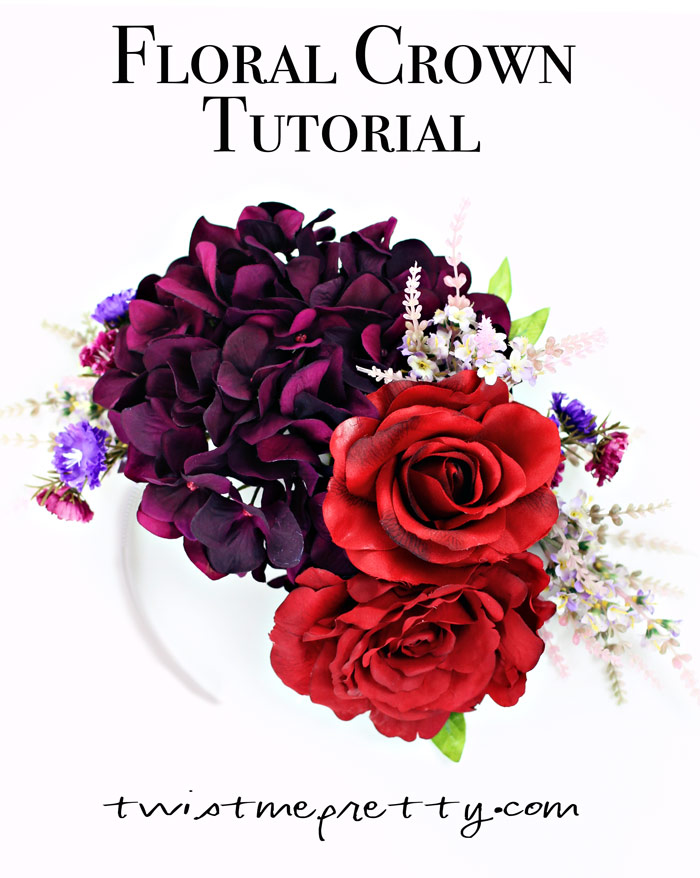 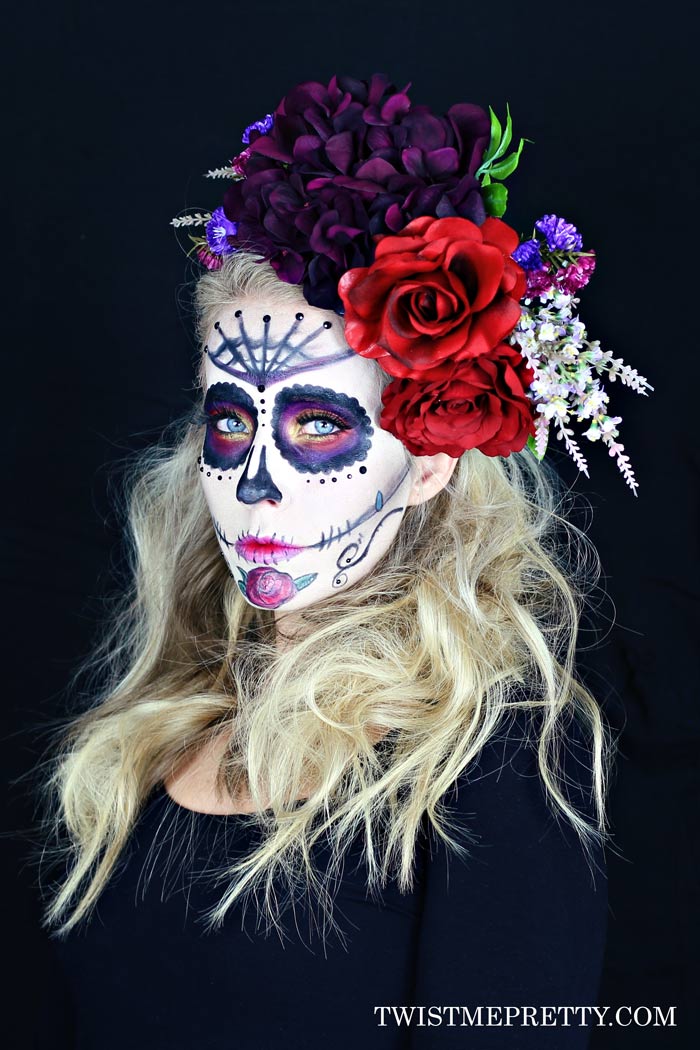 Tonight I’ll be posting this fabulous Day of the Dead makeup tutorial.  To get y’all excited, I thought I’d show a little teaser and put up the floral crown tutorial first.  Keep an eye out for the sugar skull video cause it’ll be up before the end of the night — even if it kills me! 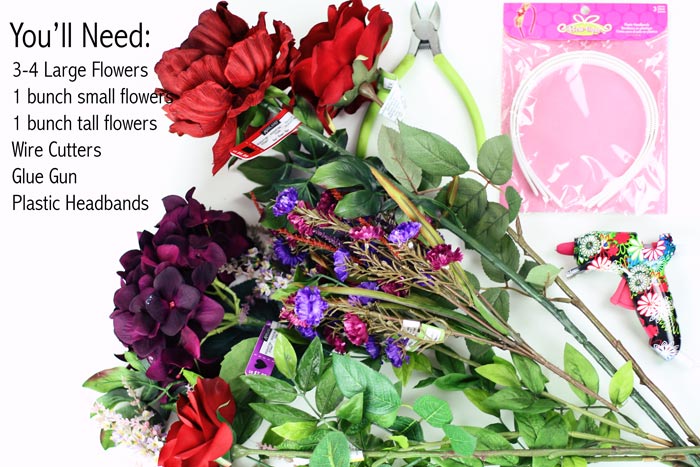 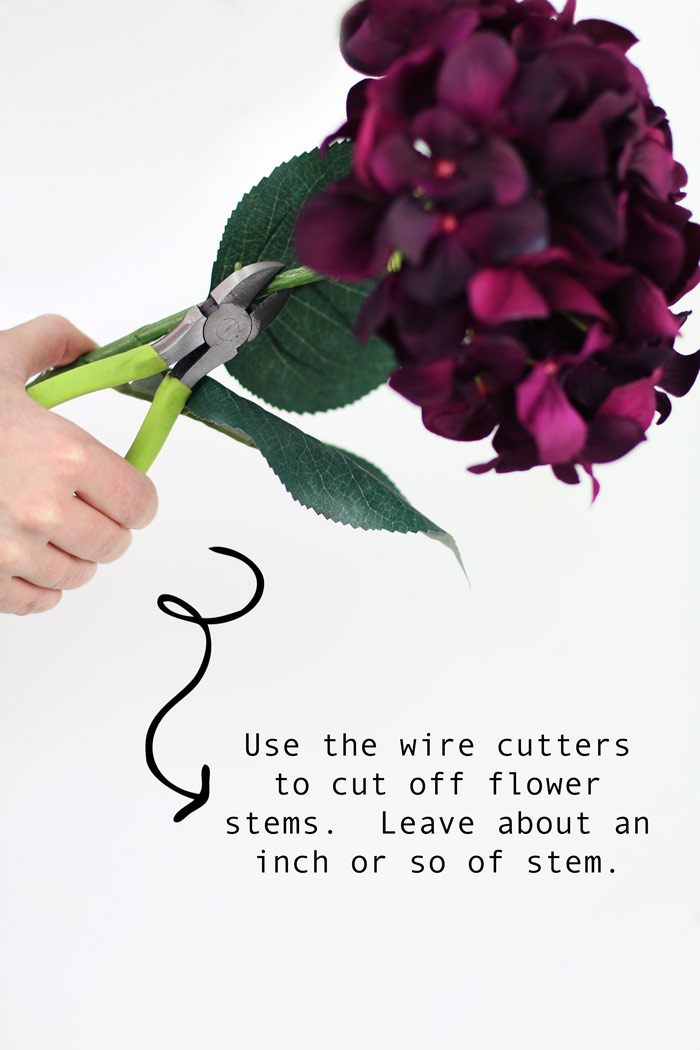 The rest of the tutorial after the jump!

So I’m not a florist and I have no idea what any of these flowers are called.  Except… I think two of them are roses?  Haha, see what you’re dealing with?!  I’ll do my very best to explain what I did and what I used but in the end it was just whatever looked good to me and whatever was easiest.  I debated on whether or not to use hot glue or if I should figure out some other way to make it look more legit and professional but I’m really happy I went the hot glue route.  It was suuuuper easy and this flower crown is STURDY.  Plus once it’s on your head you honestly cannot see what’s going on in the back so… there ya go.  My justification I guess!

You’re going to want one super large flower and then two large flowers as your base.  I chose a super large purple flower and then two large red flowers.  Then you’re going to get a bunch, and when I say bunch, I mean you’ll pay for one thing (see, total professional over here… you were warned) of flowers and then cut each flower off the one stem you bought.  Following along?  K good.  You’ll want one bunch of a smaller type flower (the deep lavender and purple flowers are the smaller type flower) and then one bunch of a tall flower (the white, light purple flowers).  Hopefully you can tell from the picture below what you’re looking for at the store.  I got these flowers all at Micheals during their 50% off sale but it still wasn’t cheap.  I think I ended up spending around $30… 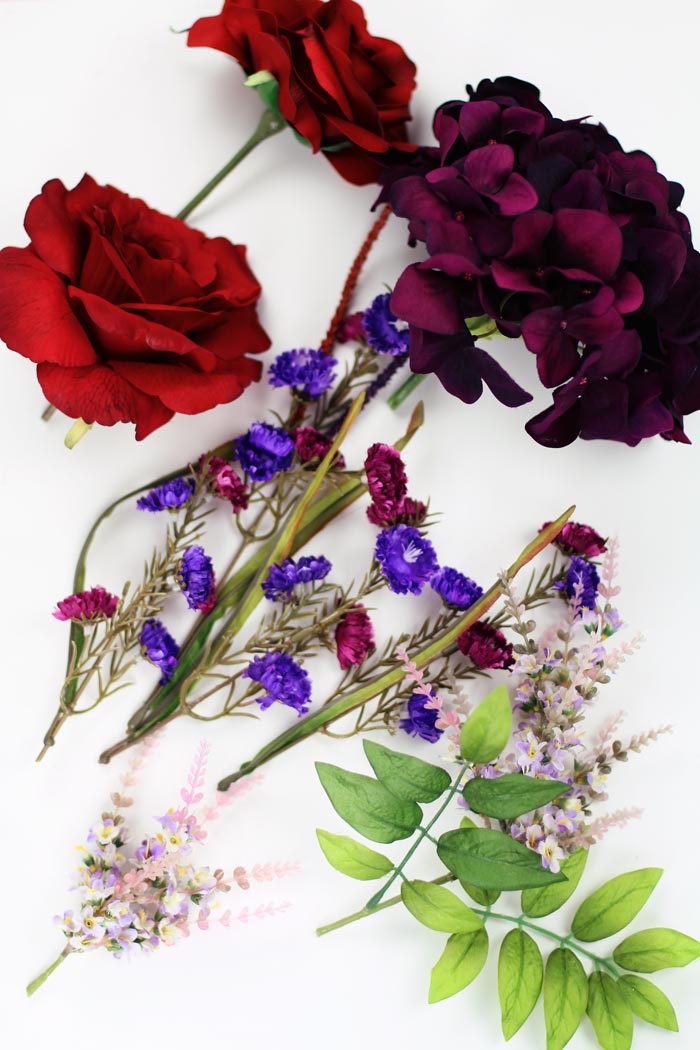 Now you’re just gonna get hot glue happy.  I put the headband on my head, and decided where I wanted the first flower to lay.  I wanted everything pretty heavy to one side so that’s what I did.  Holding the flower in place, I removed the headband and glued where the flower was on the band.  You’re going to use a big dollop or two of glue and hold it in place until it dries completely. 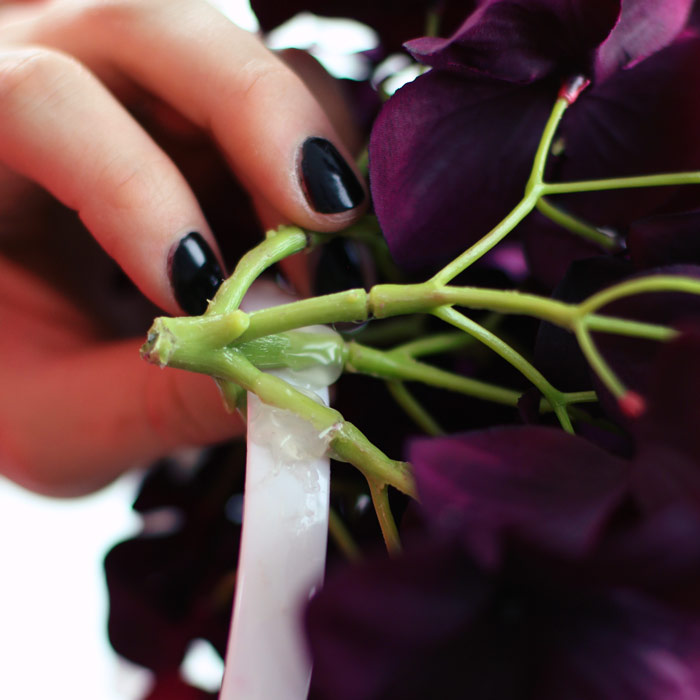 Next, you’re going to put the headband on,figure out where you want the second flower to lay, and glue it on. 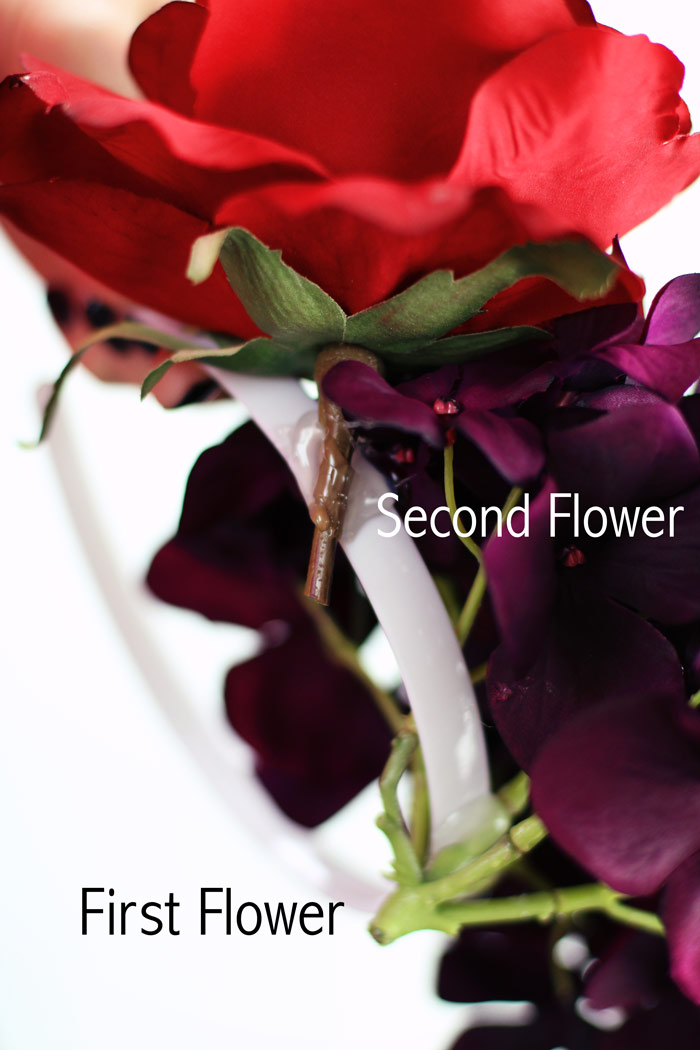 Repeat.  Put the headband on again, take your third large flower and place it where you feel it looks best.  Hold onto the stem on the headband and glue it in place. 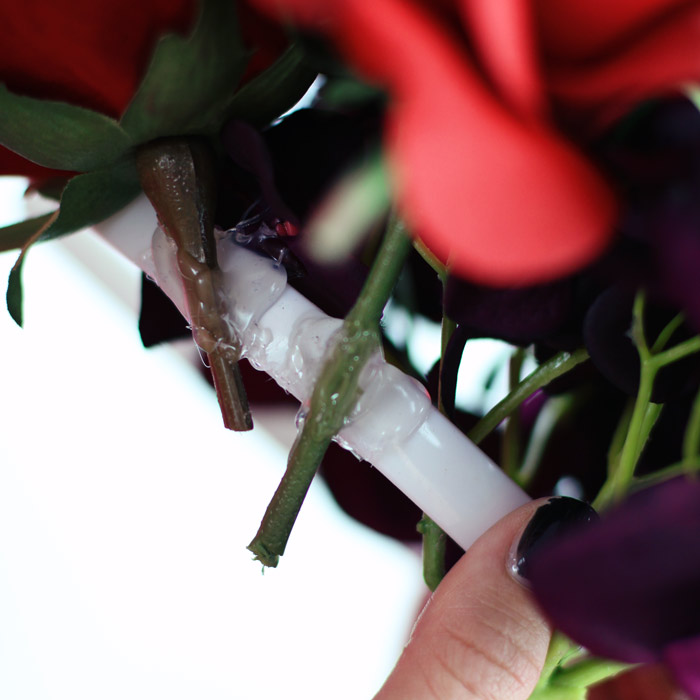 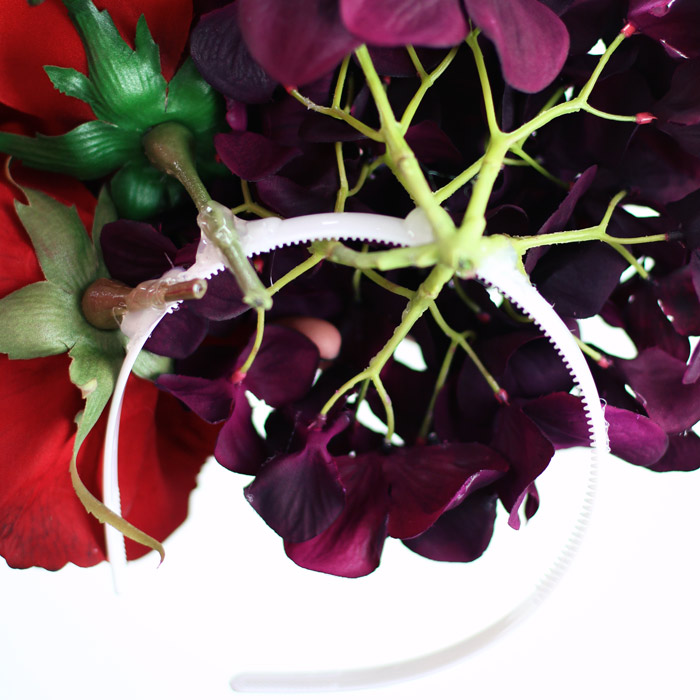 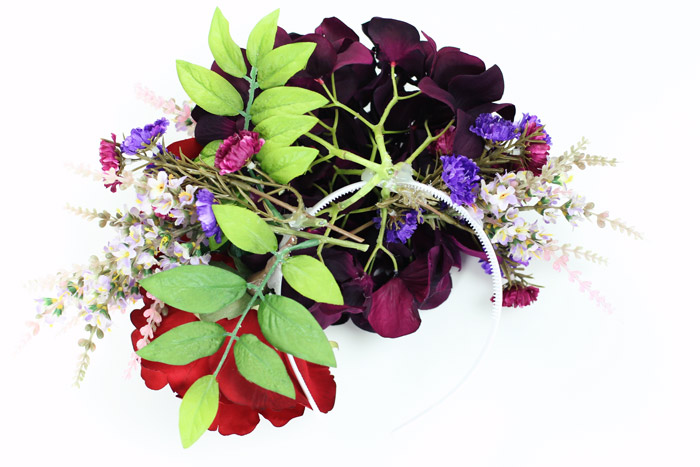 And a nice little collage for your Pinterest board in case you’d like to remember this for some other time 🙂 What do we think? Do you like it?! I’d love some feedback. I spend a lot of time on all of these tutorials and your comments are the motivation to keep producing more! xoxo